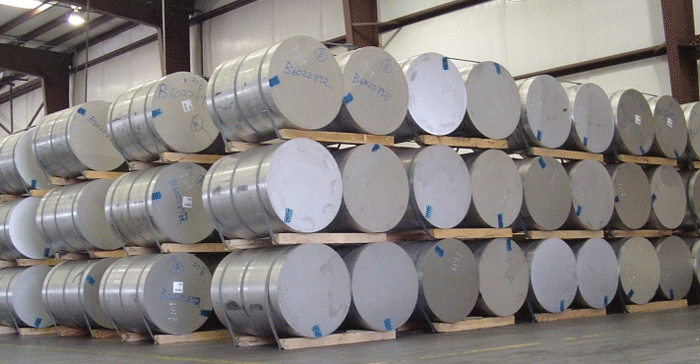 The word "alloy" is tossed about in various conversations when we discuss aluminum and its applications.

The word Alloy is reserved in the English language to describe things made from metals.

The official definition of an alloy is:

"A homogeneous mixture or solid solution of two or more metals, the atoms of one replacing or occupying interstitial positions between the atoms of the other".

In simpler terms, an alloy is a deliberate mixture of two (or more) metals trying to make it more useful than either basic metal. In aluminum without alloys, we would only know it to be primarily useful in wrapping turkey sandwiches or covering a bowl of chili in the refrigerator. In the history (~1890's) of inventing aluminum, when the euphoria of developing the first commercial batches wore off, the next problem was how to make it useful. The early developers having background in copper and other metals knew if you mixed pure aluminum with certain other metals, you will probably make something much more useful. This of course, fostered a lot of activity and the experimenters developed a growing list of valuable aluminum materials.

What's in a Name?

With each new material, you are presented with the problem of giving it a name. Since most of the activity was centered on the Alcoa laboratories, there was a bit more discipline in this process and in the beginning the materials were labeled simply 2S, 3S, 17S, 24S for example. Marketing got involved in the process and, for example, gave 17S the name "Duraluminum" and it was the preferred material for early aircraft. Aluminum alloys with a few exceptions, did not get recognized "names" compared to other materials found, for example, with steel alloys.

After WWII a Trade Group known as the Aluminum Association emerged as the "Official" Spokesperson" for aluminum industry and established discipline into the alloy naming process and creation. It was their influence that founded the current system of alloy designation. With much thought and discussion at the time, the known aluminum alloy products were broken into nine categories depending on the major alloying ingredients. The series started at 1000, and wound up to 9000.

Existing alloys were fitted into this new system by adding additional letters, such as 3S, became 3003 and 24S was assigned 2024 for examples. The temper system was given a similar "makeover" and emerged as the familiar –TXXX (and others) designation. Specific information can be found under Tempers link. Various alloys have become useful depending upon some unique characteristic and the following brief summary will highlight some of the "performers" in each alloy system.

Of the modern general purpose alloys, 2014 has been the "workhorse" for the aircraft industry after WWII. It featured high strength, excellent corrosion, fatigue resistance and generally well behaved in heat treatment. Most of the product forms have been die forgings in relatively thinner sections. 2014 alloy is being phased out of aircraft use by the more advanced alloys.

The 2024 alloy while being very common in sheet and plate forms, never found much use in forgings as it tended to be brittle in the highest strength forms and 2014 tended to be preferred except when higher temperatures were encountered. Moving from the mainstream, we get to some specialized applications.

2618 and 2219 are common choices where specialized tasks are required. 2618 is used for pistons and where high temperatures are involved. Developed later, 2219 is similarly useful in higher temperatures and/or where welding may be involved.

Alloys such as 6061 and 6063 are most likely to be found on your car or around your home. They are the first choice of most common commercial applications such as screen doors, windows, and building structural applications. 6061 is a remarkable alloy as it has the strength exceeding most common steels on a weight basis, is weldable, has great corrosion resistance and, if aluminum is on your agenda,--affordable.