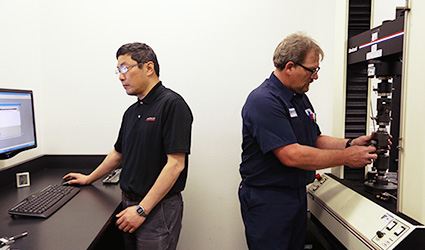 In any craft, enterprise, or business, words are used to try to describe some unique aspect of that profession. This, when associated with a particular profession, is known as jargon.

Sometimes the jargon is used simply to keep it "within" the community and confuse the outsiders. But other times words are really created and applied because there are no other terms to properly describe the phenomenon.

The metallurgical community is known to develop a jargon vocabulary with both agendas previously mentioned. There is one term that is sometimes used which rarely gets beyond the technical community because it describes the observation, and not necessarily validated by scientific proof.

The previous articles have described how aluminum is produced from solidifying a liquid aluminum into molds. This process yields large ingots each with a unique solidification pattern or "signature". The pattern established depends on the cooling conditions present when the aluminum went from a liquid to a solid.

To visualize this pattern, take a look at a tray of ice cubes in your refrigerator and if they are clear, view the structure inside. Like snowflakes, each ice cube will have a different appearance depending on how it solidified. This similar pattern in aluminum may be visually observed if you take a slice of the ingot, polish the face, acid or caustic etches the surface and examine under good lighting. This process is called a macro inspection.

When we obtain the ingot and produce a hand forging, the faint image of the original casting pattern sometimes remains if you look hard enough and know it is there. Depending on the heat treatment, amount of reduction, direction you are looking, and, if a similar process of examining a slice of the hand forging is conducted, the original pattern in the ingot may show up very faintly in the background of the grain structure.

This leads to the question, "is something "there" or not?" It's like there is a ghost image on the macro examination specimen. Since the pattern did not originate with the forging process, metallurgists call this 'a carry-through image seen as a "Ghost" image.' Aluminum does have ghosts. They are lurking way in the background and can be seen if you want to look hard enough and are considered mostly harmless.