Learn why grain is important. 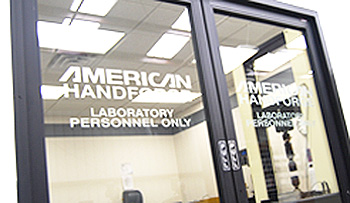 In ordering hand forgings, after the size of the block is discussed and specified, the next issue is about the grain orientation.

Why is grain important?

Turns out that grain morphology is perhaps the second most important physical characteristic of a metal after the basic alloy composition is established.

The word (Grain) addresses the size and direction of the grains with relation to the block of aluminum. Metals are built-up from an orderly arrangement of crystals. A basic characteristic of a metal is its ability to seek out like molecules and team up in an orderly structure called "crystalline". This basic crystalline form makes the building blocks for a larger structure we call "grains".

The whole process of making grains begins when liquid or molten metal is cooled enough to make it a solid form. For very pure metals, their atoms upon slow cooling from a liquid, prefer to assemble in an orderly solid structure and if left "undisturbed", would grow and form into one very big crystal grain as it slowly cooled.

In some electronic and laboratory uses, "big" crystals in metals are not desired nor useful. It is the job of a metallurgist to properly devise and introduce controlled "disturbances" in the solidification process to make the grains "break-up" into proper size.

The next step is to direct the manufacturing (working) process to establish the basic directional structure (grains). This second requirement is to control the final grain alignments to match the drawing's call-out.

The initial key needed to control the grains starts in the casting process. The process of aircraft aluminum alloys for example starts with "pure" aluminum and continues with the addition of up to 10 % of other metals in the liquid state.

This initial mixing of different metals yields a benefit of disturbing the solidification process enough so the grains already have a tendency to form small "cells" of grains. This process is not foolproof however; so additional manufacturing steps are required in the casting process such as the addition of "grain refiners" and controlled cooling rates.

The initial grain-control in hand forgings starts with the applied forge stock. If you were to examine in the cast stock it would give the visual appearance that the grains are basically the size of little "bb's" squeezed tightly together with no space between them. In the ingot, no matter which direction you look, the grains appear all the same size and do not have a significant "preferred" orientation. Because of this you really can't describe the grain orientation in the cast stock with reference to the original cast form..... ..More on this process will be described later.

The subsequent process of hand forging is to transfer the un-aligned random grain orientation of the cast stock into a controlled "wrought" structure with enhanced metallurgical properties. This wrought working operation "refines" the grains and transforms them into a structure, which through thermal processing will exhibit high strength and toughness.

The forging process involves a controlled heating of the stock and while hot, "worked" between flat dies of a powerful forge press into a smaller size with dimensions required for making the final product.

Care must be exercised in this process to prevent a secondary growth of the grains, which may lower the strength. An initial engineering decision by the user selected the size and preferred orientation of the "grains". The specified grain orientation should reflect the different load paths that the finished part will be subjected. Normally the short transverse is actually the smallest dimension.

Often, due to overriding engineering considerations that are based on engineered load paths, the results are not the smallest dimension. It is the metallurgist job therefore, to schedule the processing to orientate the grains so they conform to the ordered part directions.

For biscuits, it becomes a bit more complicated as we add a tangential or "T" direction to the mix. It is wise to include on the drawing for biscuits the special testing directions that should be controlled or tested for lot release.

These directions originate with respect to how the stock was initially forged and predominately "worked". There is a visual similarity to the appearance of the grains with respect to describing their size after forging. Remember the grains were almost "spherical" to begin with.

At the completion of the forge process, they now have a distinct shape reflecting how the stock was forged. For a rectangle, the grains in the "L" direction are typically elongated the most and the LT grains are next, and so on.

The mechanical properties (strength) for each grain direction are therefore different. Visual comparisons can be made from your experience with wood for example. You intuitively pick lumber for use in your home projects with different directions in mind. The strongest grain direction is of course, L or longitudinal. The other grain directions for wood result in how the particular board was cut from the tree. With aluminum hand forgings this is not the case, as the other directions are created based on hot working the forging to the final dimensions.

So from the previous description, the job of the hand forger is to take the original randomly orientated grains of the cast stock and hot work them into an ordered block size with the characteristics needed to meet the designer's applied specification.