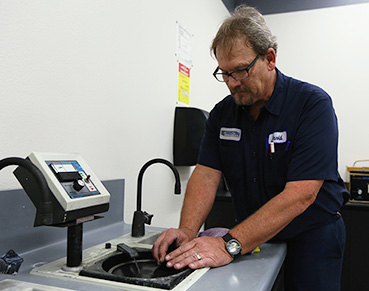 Corrosion comes in many forms. We are familiar with the corrosion that appears in our cars and on the windows of our aluminum screens in our homes.

These effects are visible (rust and white powder-pitting) and there are ways to prevent this type of corrosion with steel by galvanizing, or with aluminum, anodizing and painting.

With stress corrosion it is different. You can't see it beginning; only the effect after it has done its internal damage.

Stress Corrosion Cracking (SCC) is a special category of corrosion. The greatest impact of this type of corrosion is within the airframe industry making airplanes.

In the 50s and 60s aircraft maintenance people began to notice cracking of large aluminum forgings made from 7075-alloy after they had been in service for a while. Examinations would show no obvious external corrosion, but a close look revealed sometimes many cracks starting from the surface, and finally when they got too big, the part would fail completely, resulting in serious disasters.

There were embarrassing failures of airplanes just sitting on the ramp when the landing gear would suddenly collapse without warning. Needless to say, a lot of work went into finding the cause, and trying to devise a fix.

What was discovered was that the "new" alloys, like 7075 and the German import that was morphed into 7079, seemed to exhibit this terrible behavior in the - T6 (full strength) heat treat condition. Also the cracks always seemed to follow a path in the severe short transverse grain directions. This meant for die forgings, the parting line was most susceptible.

The other factor seemed to indicate the length of time the part was exposed to "the corrosive elements" would predict its failure. Also noted was that the level of a sustained (constant) tensile stress at the surface of the part affected the threshold time for the cracking occurrence to begin. The normal protective treatments for aluminum such as anodize and painting did not prevent this type of corrosion from occurring.

So, after much research it was determined that stress corrosion cracking is what was causing the failures. It was found for stress corrosion to occur; three things must exist at the same time:

Eliminate anyone of the three factors above, and there will be no SCC occurring. Turns out that the 7000-alloy series material is all quite "susceptible" in the -T6 condition. This may occur when the short transverse plane is exposed to the surface and there is a residual tensile stress resulting from fabrication or service loads. Since the residual stresses are part of the manufacturing process and operating environment, it is not practical to try to eliminate them. Hot or warm water quenches reduce residual stresses, but also have a strength penalty. Alloys such as 7079 were the most susceptible to SCC and have for most part been eliminated from all aircraft and certainly for new designs. With regard to residual tensile stresses while the goal is always to minimize them, for some applications, cannot be done. Pressure vessels for example in hydraulic applications and landing gear always have load induced residual stresses. As far as a corrosive environment, any exposure to the outdoors will subject the part to enough of a corrosion exposure or environmental hazard to cause a part exhibiting 1 and 2 factors listed above, thereby the possibility of failing in a SCC mode.

The solution to this problem was to develop a material less susceptible. Investigations showed that by heating in an oven for "several hours" of - T6 7075 aluminum to temperatures at around 350 degrees F., provided a measure of resistance to SCC. Now this resistance to SCC did not come without a penalty. The treatment is known as aging beyond the peak (- T6) strength or called “over aging". Designers had to recognize the reduced strength on the part to accommodate the lowered properties and therefore due incur a weight penalty over the peak strength tempers. This treatment or condition is called -T7 and for the first material application it was assigned -T73 temper. The application of the overage thermal treatment spread rapidly for 7075 applications. Some alloys like 7079 would not respond to this technique and has been phased out of production and design.

For quality control purposes, a need existed to find a quick and inexpensive method to determine if the thermal process (over aging) was effective in reducing SCC. At the time production could not wait for 30 days of testing in a laboratory to see if it were susceptible to SCC. At the time, that was the only way you could be sure if the material exhibited good SCC behavior. It turns out a physical characteristic of aluminum electrical conductivity (EC) is a good indicator of relative resistance to SCC. Thousands of laboratory SCC tests done at the same time as the EC, showed if the EC or electrical conductivity was 38% lACS or greater, almost no test bars would fail when exposed for 30 days to a salt water solution while being stressed in the short transverse to sustained tensile loads above ~40,000 PSI. This easy to obtain EC determination became a routine test to be performed and reported on all -T7 type treatments. Thus, a conductivity value is almost always given in the test reports furnished, for alloys that have been processed for resistance to SCC.

All new alloys such as 7050, were developed with SCC resistance in mind, and benefit from this "over aging" treatment. So, today airframe designers with these "new" materials don't have to worry about possible SCC, because years of history have shown there are no sustained residual stresses above the threshold of 40,000 PSI. So, Stress Corrosion Cracking is not a problem today. With the airframe industry's alloy and temper choices available, work still continues to find better solutions to reduce the weight penalty imposed by the "cure".