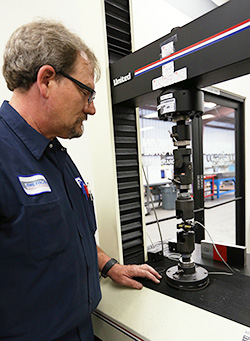 The need for this special processing may occasionally get lost in the history of the part or its original purpose may have been forgotten. What actually is going on is the task to reduce the "Residual Stresses" locked in the metal. There are several reasons for wanting this process done.

The first and most important reason to reduce or minimize final part warpage during machining by taking away all the excess material. Why is there warpage sometimes during machining? It occurs because of the "locked-in" residual stresses induced by solution heat treating.

These residual stresses are created during the "Quench" period of solution heat treating of aluminum. The quench period of heat treating is required, and rapidly removes the heat from the part to "freeze" the molecules in position. This is done by plunging the very hot metal into a colder water bath, but has the side effect of inducing locked-in residual stresses. Not much can be done to avoid these stresses in the first place without reducing the part's strength, so we are basically left with one method of stress relieving for hand forgings: compression stress relieving.

How Does Compression Stress Relieving Work?

Without resorting to introducing a lot of additional concepts, let it be sufficient to mention two metallic "behaviors" - plastic and elastic – which can easily get them confused. We are familiar with the two words in everyday life, but they mean something very specific in metallic behavior. Elastic behavior, meaning when the part is subjected to a force (push-pull-squeeze) and then removed, it returns exactly to the same shape as before. Plastic behavior differs from this, in that it does not return to the same shape as before the force was applied.

An example would be a car door. If someone hits your door in a parking lot and it did not leave a dent, this event is called "elastic". If it was hit just a little harder, there is a "Ding" resulting. The steel door just suffered from "plastic" behavior. Springs are another good visual example of elastic behavior. They always return to the same position unless you overload them. When you apply a force to a material it first undergoes elastic deformation (spring like) and when you go beyond that point, it turns out to be plastic (permanently deformed) behavior.

From the heat treat operation, we have stated that there are residual stresses locked into the part, and it turns out they are there, because they were created in the stress state known as "elastic". They are like thousand tiny little invisible springs on the surface layers locked into position. When the part is machined and the material is removed to make the part, a lot of the elastic stresses are also removed, but the problem comes from the remaining material that isn't removed. Since the part is not symmetrical, the machining process, have removes more "springs" from one side than the other.

The unbalanced elastic forces act like a "wedge" and physically cause the part to move when released from the holding fixtures. The part after this machining, wants to return to a balanced stress situation (and shape). In order to do that, the part "moves elastically" to a new shape which is called "distorted".

In order to eliminate the offending elastic behavior and reduce the residual stresses, applying a plastic operation to the metal soon after solution heat treating is necessary. This is what we do at American Handforge. Compression stress relieving is that plastic operation. The room temperature hand forging is returned to the forge press after solution heat treating and placed between two flat narrow dies. The forge press plastically reduces the thickness slightly by 1 to 5 percent in increments along the entire length of the part. The compression in effect "breaks up" all the little springs and they just disappear.

At American Handforge, we carefully control all aspects of this operation to yield a consistent low residual stress forging, suitable for precision machining and dimensional stability. We carefully compress the forging just enough to make sure it achieved the required plastic metal flow, but not too much to introduce other undesirable effects. Sounds easy, but in any metal process, control and precision must be exercised.

Following the compression stress relieving, the hand forging is artificially aged to the final temper. The Aluminum Association has designated the stress relieved tempers by compression by adding "52" to the end of the basic temper. -T652, -T7452, and -T352 are examples of this temper code. It is important to remember that even though a part has been properly stress relieved, it does not mean it is "stress free".