Learn the basic rules for the alloy temper designation system. 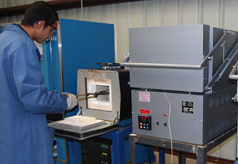 Aluminum producers go to great lengths to process the product so it is useful in the application intended. This requires the material to have a commonly recognized "Name" for its final condition called Temper.

It used to be easy to keep track of the various conditions or "Tempers" in the early days of aluminum production because there were so few options. As the number of alloys and different combinations of processing multiplied, a system was set-up to try to make sense of all this. Therefore, the Aluminum Association was chartered to make "rules" and keeps a master list of tempers and their properties.

There is a committee from aluminum producers that meets regularly and maintains discipline in the system. They have not always been successful in reigning herd on the aluminum industry. A few odd temper call-outs got some use and into specifications prints before a "corrections" were attempted.

For example, the temper T411 was used often by the forging industry to describe heating the aluminum to the normal heat treat temperature and then air cooling. This was done to "stabilize" it, and to enhance the ability of ultrasonic inspection to find possible internal flaws. Since it is a form of hardening, it had very low strength and was never intended to be used in this condition.

The danger of using a "-T4" designation for this special condition was recognized when requests were often made for information on how to age harden the -T411 to the -T611 condition. The Aluminum Association Technical Committee on Product Standards fixed this one by changing the temper to -01 designation. Instances like this showed the continuing need to standardize the temper designations and maintain discipline to the system according to some "rules".

"F" -Means "as fabricated" or, in other words, nothing was done to it after it was made by the producer after the last fabrication operation. In reality, nothing is actually ever "used" in this temper condition, as it is just a convenient way to label or give a name to forgings in an intermediate stage of processing.

"0" means it has been hardened. This is accomplished by heating to a high temperature and then basically slow cooling so as not to produce a hardening effect. This temper is used when forming is scheduled later in the manufacturing process.

For structural aluminum, a heat treating to a -T temper (example –T6) to improve its strength is normally planned after a forming operation.

"H" -Is the condition assigned (examples: H111) to alloys that can't really be heat treated to higher strengths. Hardening-strengthening of these alloys is accomplished by what is called "strain hardening" which means the aluminum product is either, stretched, compressed or rolled a substantial amount at the final manufacturing process. Some commercial alloys respond to this process and make useful products by this strengthening method alone. For hand forgings, it is accomplished by carefully compressing between the dies at room temperature. An example of this would be 5083H112.

"T"-This basic designation is what most hand forgings is ultimately heat treated. The official definition is: "thermally treated to produce stable tempers other than F, 0 or H". The T is always followed by one or more digits to indicate more specific condition such as - T6, - T74 or T7452.

Even now with these basic "rules" above, things get complicated if you continue on to the variations of the basic tempers possible. For hand forgings the important temper designations are -T6 and -T7. You never see stand alone -T7 temper because -T7 means it's been over aged, and that always brings up the question of being over aged? How much? So you see -T73, -T74, etc. associated with -T7, attempting to describe the degree of over aging. Often you see -T7X to describe the multiple conditions possible, rather than just -T7 alone. In order to fully understand all the variations, you will have to refer to the industry standards.

For hand forgings, a most useful temper is the stress relieved temper and that is indicated by adding "52" to the basic -T6,-T7X tempers yielding for example, -T652,-T7352, -T7452 etc. Another common temper is the -01, which was described earlier. This intermediate temper is selected whenever extensive machining is scheduled and the part will be fully heat treated later. Now after all this---, how do you lose your temper? Easily, just heat the aluminum to a temperature beyond what it was processed in the first place. For most alloys 250 to 300 degrees is sufficient to start a loss of "temper".