When American Handforge produces a forging there are numerous quality assurance tests that the material is subjected to. 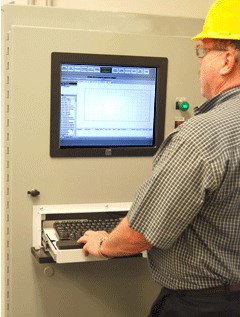 Some tests are what we call "destructive" and others are called "indicators" which do not harm or consume any material for the testing. The indicators are useful in "predicting" its performance in an actual destructive test.

An illustration of this might be the testing for ripeness of watermelons. The act of "thunking" the watermelon prior to purchase and listening to the sound it gives to gage its ripeness. We will find out later the quality of the melon, but for the moment one has to rely on ones' senses to evaluate its quality. This would be considered an indicator test, but for most of us it has not been too useful. We do it anyway before we buy the melon because we have no other way of determining its quality.

Another example would be the common medical tests such as blood pressure and cholesterol measurements that doctors use to measure our health. There is a general disagreement from the medical community of setting absolute limits for both measurements; however, they are in agreement that high values for both are generally considered unhealthy. This is also the case for aluminum products with a similar dilemma but the "number limits" have been a little more defined in material specifications. Just how they have been obtained is still somewhat contentious. Conductivity measurements are another complex indicator test and will be discussed later.

There are two common indicator tests performed on hand forgings supplied in the tempered conditions and reported on a test report. Hardness is a great indicator test for strength. Hardness testing is performed on the surface of the parts and yields a "number" (Examples: HRB 85, BHN 126 etc.) for evaluation purposes. There are two hardness indicator tests useful for estimating strength of hardened aluminum. Brinell and Rockwell hardness testers take their names from the respective inventors.

To make the process description simple, each tester makes a small "dent" in the surface of the aluminum by a controlled "hitting" it with a rounded "hammer" and basically measure how big the dent was. The Rockwell machine produces a very small surface round dent and the Brinell is somewhat larger. For both methods and machines, the bigger the dent made at a constant force, will be reported as a lower number. It can intuitively be seen that harder material will resist the "hammer" more, and the dent will be smaller and the hardness value will be higher. So the respective machines produce numbers which are indicators of strength and therein begin the process of evaluation as to what those numbers mean.

The evaluation always relies on past correlation of destructive mechanical property tensile testing to be useful. History of testing thousands of aluminum products at the same time recording both hardness and tensile has produced a record of "expected" hardness for various alloys and temper conditions. Now, these expected values are useful for quality assurance purposes, however, they provide no real useful data for engineering use, or final "word" in its actual strength.

For this reason, and vagueness of the hardness value produced, no aluminum specification's use hardness minimums as a quality control requirement. Hardness testing is done on a routine basis, values reported for information.

The final acceptance of the "lot" is based not on an indicator- but on an actual destructive test cut from the center of the forging. Just like the watermelon testing of "thunking", the only real way to test the melon's ripeness was to cut into it. Same way with aluminum hand forgings. Each piece is tested for surface hardness indicators, but tensile properties are done destructively on a piece cut from the center of the forging from a "lot' basis. The tensile values (facts) rule, and are the final decisions in any dispute involving strength issues. The hardness indicators are just "opinions".

Everyone must rely on facts in the final analysis and that is why tensile strength is a requirement in material specifications.