What does Exfoliation have to do with aluminum? The answer is - for some alloys and tempers... plenty. 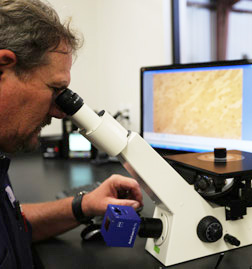 We have previously explored the bad effects of corrosion resulting from a sustained tensile stress across the grains in a corrosive environment which is called- "Stress Corrosion Cracking".

This SCC corrosion caused unexpected failures of critical parts in airplanes and prompted an investigation to control. In addition, SCC is not the only "affliction" that the engineering community has to guard against in aluminum structural material.

Exfoliation corrosion is first noticed by a visual "disturbance" or subsurface corrosive attack (leafing-flaking) parallel to the exposed surface layers of the aluminum part. This disturbance or attack is usually along the grain boundaries predominately in products that have highly worked, elongated grain structures, such as thinner extrusions, plate or forged material.

The layers of corrosion products forming in the grain boundaries cause the metal to swell and "flake off" resulting in an obvious bulging condition on the surface. The rusty holes you discovered in the lower sections of your cars if you owned it long enough are basically exfoliation corrosion of the steel sheet. Aluminum does not rust but advertisements seem to leave out what it might do.

Most aging airplanes were "retired" because of excessive exfoliation corrosion of the structure, especially in inaccessible areas. Surface treatments such as anodize and paints helped, but any small break in the barriers combined with water or other electrolyte, subjected the material to corrosion.

The quest for control of this corrosion type (Exfoliation) started in the '60's as some hull plate material employed for high performance assault boats in Viet Nam was corroding at an alarming rate. The corrosion engineers assigned to fix the problem first devised a method of creating a place where corrosion could be created, duplicated and studied in an accelerated manner. The standard salt spray corrosion cabinet was modified to enhance the conditions which would promote exfoliation corrosion. The major disadvantage with the salt spray cabinet was it took a week or so to get results. All major aluminum producers employed these test facilities and the outcome of industry cooperation resulted in establishing of several ASTM specifications for exfoliation corrosion testing. The problem with the boats was found and necessary processing changes were employed. This initial success led the cooperating companies to tackle other exfoliation problems.

Aircraft manufacturers are always caught between two competing design concepts. They are: cost of possession and cost of operating. Cost of possession means you bought it cheap and enjoy the economics of low price, but perhaps not of "highest quality" but it does the immediate job and you defer the problem of longevity to someone else. Cost of operation means it was designed with certain features that favor operating with low maintenance costs and/or low fuel consumption. These two concepts (possession-operating) are usually mutually exclusive which means there is no "free lunch". The –T6 material "did the job" but did have its corrosion problems.

That led the quest to find a solution for this dilemma. By then, the engineers discovered that –T73 material never experienced a hint of exfoliation corrosion, but to apply the lower strength treatment was not a satisfactory solution to the "cost of operation" due to the weight penalty incurred by the –T73 temper.

The question then came up- is there something between –T6 and –T73 that would guarantee good exfoliation corrosion resistance? It turns out there was.

It was discovered that if 7075 material was "slightly" overaged from the –T6 peak strength condition, exfoliation corrosion became,-- not a problem. There was a small penalty in strength, but in the equation of possession/performance and marketing efforts, it was a winner. The basic temper assigned to this condition was eventually called -T76.

The task group set up to explore the performance of aluminum in boats, having solved that problem, looked at the need to establish an industry testing standard for this new –T76 material. What followed led to the eventual abandonment of the formal salt spray cabinet of testing specimens for lot acceptance, to more efficient and timely exfoliation tests (EXCO G-34) which take ~ 24 hours.

When the "new" alloy of 7050 was introduced, the full corrosion resistance properties were explored and it was found to behave very similar to 7075 with respect to SCC and exfoliation resistance when subjected to "overaging". The –T76 temper was assigned to extrusions and thin plate which could take benefit from this treatment.